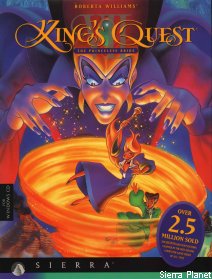 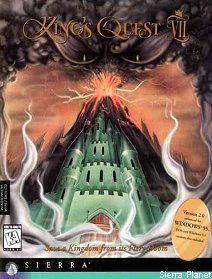 “King’s Quest 7: The Princeless Bride was released in 1994. It featured an innovative chapter-based design, an intelligent bookmarking system for saving games, and an easy point-and-click interface, making the game more intuitive for the novice gamer, while still being challenging for those who had enjoyed the series for the past 10 years. This was the first King’s Quest game which could not be released on diskette, as the number of disks which would be required to hold the files would never fit in a game box, or even multiple game boxes! The [Disney stylized] graphics were breathtaking in scope, created by a team of animators who drew individual images, cel-style, and then digitally added color and sequenced the images to produce motion. The resulting animation not only set new standards for game graphics, but also rivaled or surpassed the animation available on TV or film.”

“Rosella of Daventry is reaching marriagable age, and her mother Valanice hopes to find a suitable match for her daughter. Unfortunately Rosella has no interest, either in the men her mother has chosen, or in marriage itself! As the two of them walk in the woods, discussing this very subject, Rosella sees a small dragon sprite leaping from a pond, leaving behind it an image of a fantastic castle floating in the clouds. Intrigued, and feeling mischievous, Rosella dives into the pond and disappears. Valanice leaps in after her, and the two find themselves drawn into a vortex of magical energy, and separated.”

“Now each woman must pursue her own quest — Rosella to save the Vulcanix Underground from the evil witch Malicia, and Valanice to find her daughter. Before they can be reunited, each must cross the land of Eldritch, face the dangers of Ooga Booga, delve into the world of spirits and legends, and finally confront Malicia in the heart of an active volcano!”